A community of seed savers will help steer this mid-1800s okra variety back to its original phenotype through selective seed saving.

In 2018, Seed Savers Exchange sent Chris Smith (executive director and big time okra fan) a packet of  Whidley White Okra seeds. The variety was described as having some mixed up genetics (potential cross pollination or varietal drift). Chris’ task was to grow out the seeds and select the phenotype most consistent with what was thought to be Whidley White: a pale (white) stubby okra pod with deep ridges. This was part of Seed Savers Exchange Restoration Project.

The seed was first donated to SSE in the late 1980s by Mrs. H.L. Jarrard of Oakwood, GA with very little information beyond the variety being in one family since the mid-1800s. In 2012 Seed Savers Exchange tried to track down relatives of the original donor and hit a dead end. In 2021 Chris Smith took up the cold case and had some intense Googling and a random phone call led to a break through which renamed the okra to Whidby White – see the blue box below: Whidley White becomes Whidby White!

An 1832 article in the Genesee Farmer and Gardener’s Journal titled “Okra”, noted that white okra was considered “supreme” in the south. White Velvet is a well known variety from the late 1800s and has been boarded onto the Slow Food Ark of Taste. Another variety that is missing (assumed extinct) is White Lightning. White Lightning okra was a variety bred by Hastings Seed Co. (back to Georgia!) and it won an All American Selections award in 1932. That happens to be the same year that Clemson Spineless won the award, and makes White Lightning one of only seven varieties in all time to receive the AAS accolade. If you have knowledge of this variety then please get in touch! 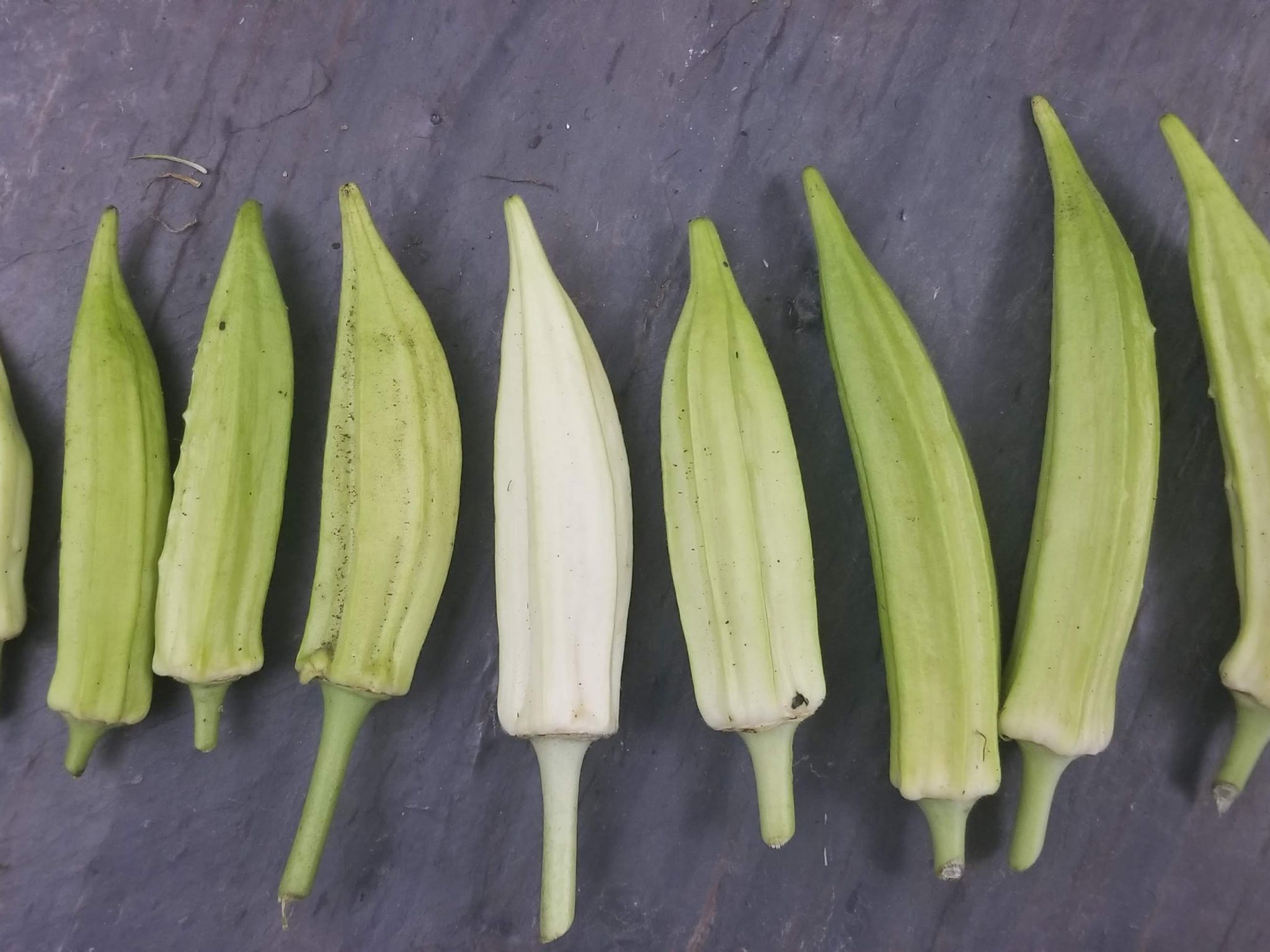 In 2018 Angie Lavezzo (Sow True Seed) allowed Chris to grow about 30 plants at her farm (Now and Zen Farm). The plants were all over the spectrum in terms of colored pods and shapes with some wartiness on the pods as well. The pale genetics were there though! 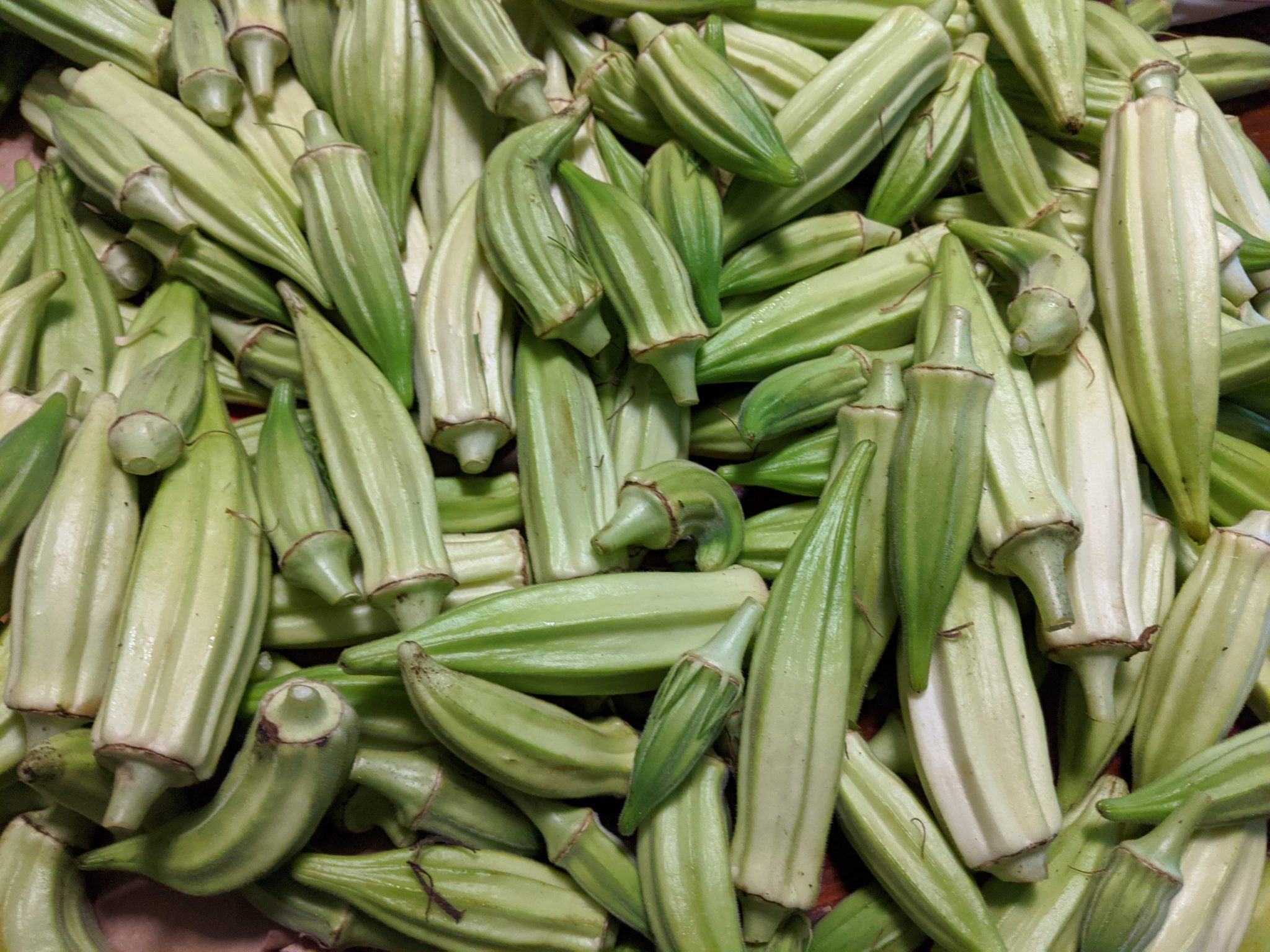 In 2019 Carol Koury (Utopian Seed board member) allowed Chris to grow about 50 Whidby White plants in her garden in North Asheville. The wartiness did not show and there was a greater quantity of pale pods. Plant height was quite diverse. 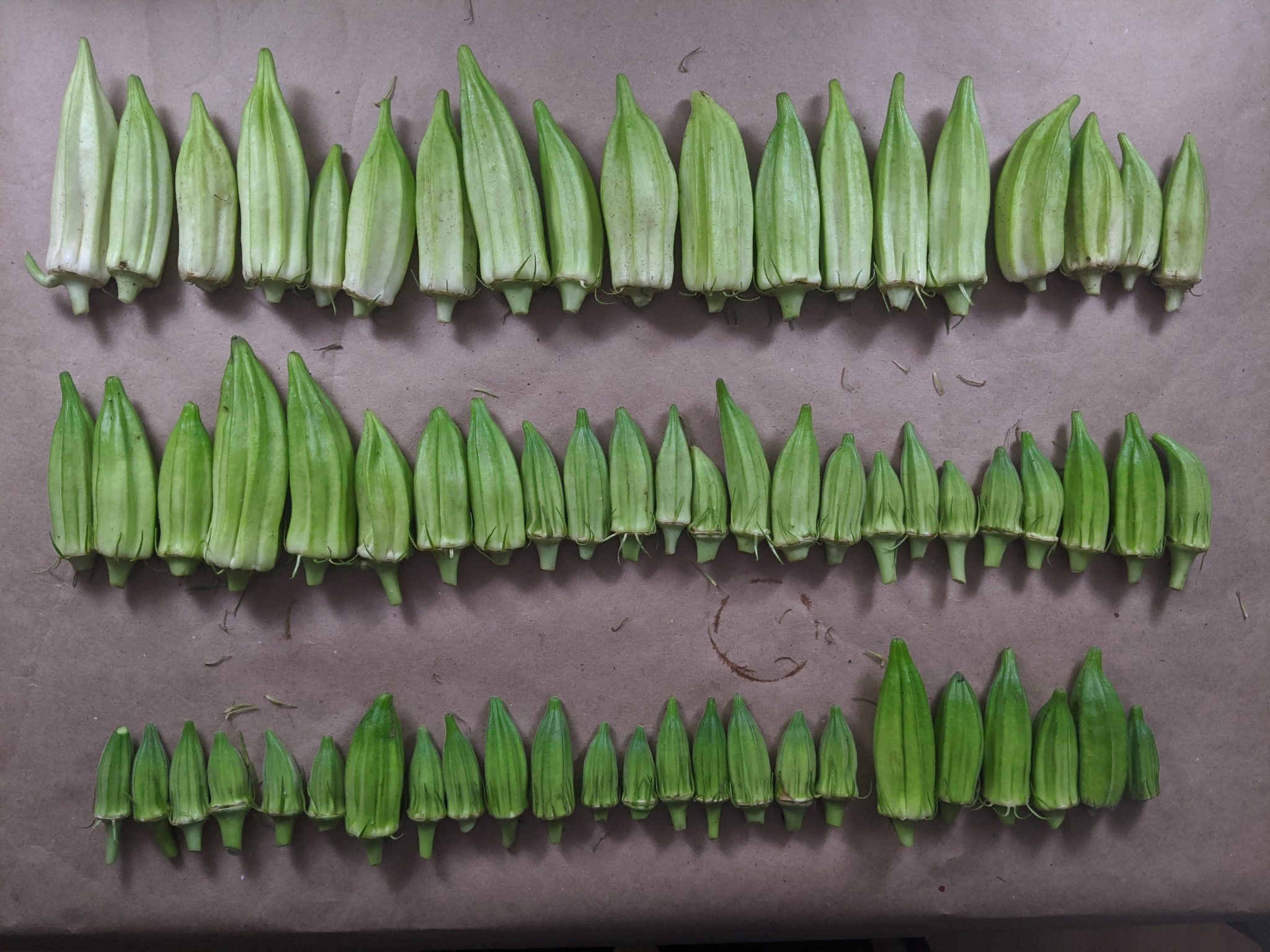 In 2020 Michael Fortune offered to machine plant a 300 ft row of Whidby White at Bob Lackey’s farm (Mars Hill). This allowed for much harsher culling of off type pods  (any darker green or pods with spines). Plants were also selected for uniform 4ft height.

In the late 1980s Seed Savers Exchange received seeds from a Mrs. H.L. Jarrard of Oakwood, GA with very little information beyond the variety being in one family since the mid-1800s and it was called Whidley White. Chris Smith recently took up the cold case of trying to track down the family and some intense Googling led to him connecting with Joey Duran and his wife Tammy Duran. Joey is Mrs. H.L. Jarrard’s nephew and lives in the house where she grew up. Joey was able to fill in a lot of the family background, including the revelation that Whidley is highly likely the wrong name for this okra.

Mrs. H.L. Jarrard’s name was Vera Jarrard, married to Harvey Lou Jarrard. Vera Jarrard died in 2002. Vera’s brother (Joey Duran’s father) was Walter R. Duran (born 1931, married to Winnie Duran). Walter died in 1999 and his obituary notes, “Walter enjoyed working on his farm, growing a garden, riding on his tractor, wood working as well as tinkering with old trucks and clocks.” Walter’s mother, Ethel Whidby Duran, was born in 1892 married Jack C. Duran. Ethel’s father was Joseph W. Whidby (born 1856) and is the possible originator of this family heirloom (or perhaps his father….). So, this variety should almost certainly be called Whidby White and not Whidley White (we assume it was a typo, mis-hearing, or mis-reading of the original name).

We still don’t have a physical description of the okra, neither Joey nor Vera’s daughter (Melinda) have memories of a specific okra grown by their respective father/mother. However Walter Duran was a big time gardener and seed saver and Joey still has access to a freezer full of seeds that his father kept. In 2021 we are going to grow out some of those okra seeds and compare to our ‘Whidley/Whidby’ White.

We will be making and sharing educational videos and materials to support your okra growing and seed selection journey! By joining this project you are helping us with our Whidby White restoration, but we aim to help you become seed savers, selectors and stewards.

In 2021 we have 260 volunteers growing Whidby White and joining in with our community seed selection efforts. Each volunteer has received a seed selection kit to help hunt for the palest pod. If you missed out on seeds this year, you can still follow the journey, or support by making a donation below.