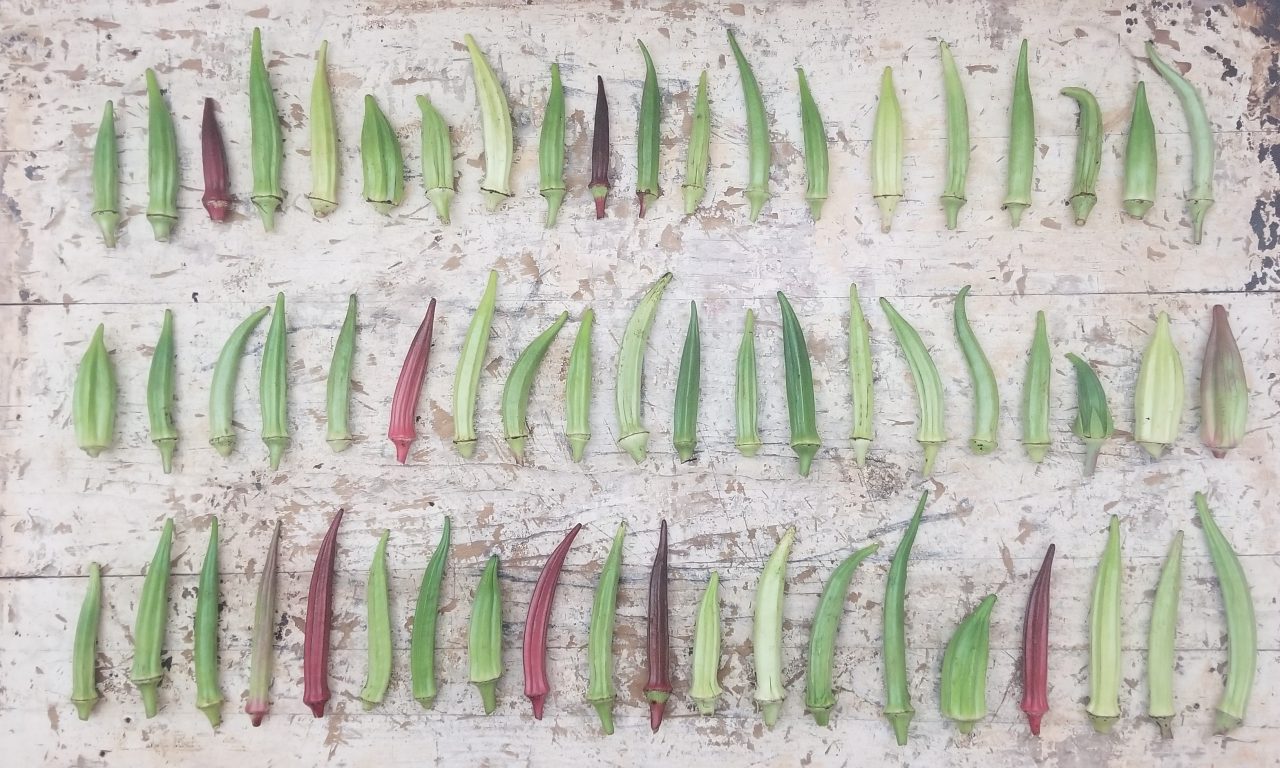 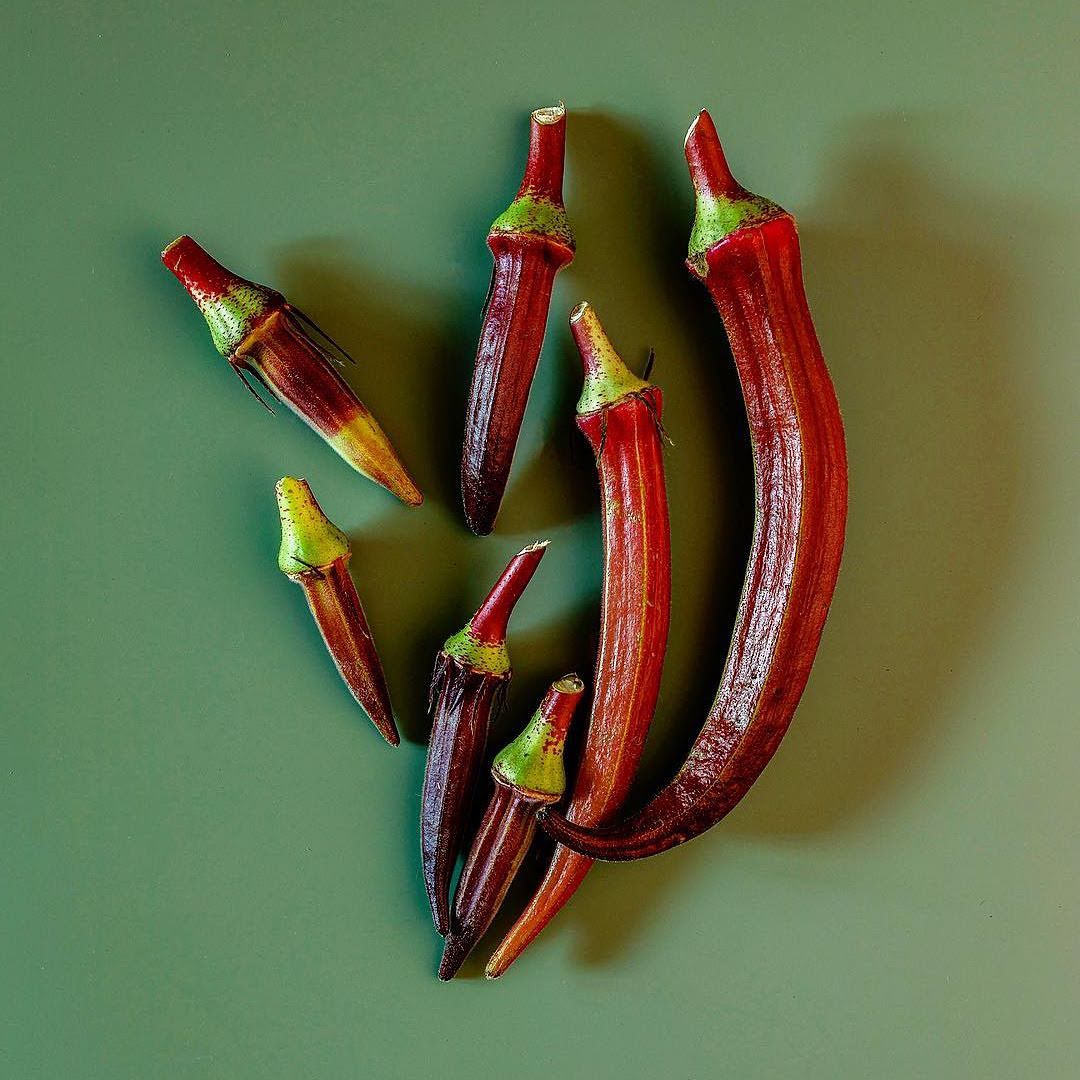 In 2018 Chris Smith grew out 76 different varieties of okra as a research project to support a book he was working on, The Whole Okra. That trial was funded by a successful Kick Starter Campaign and the generous sponsorship of Sow True Seed. Variety observations and trial notes from the 2018 Trial can be seen here. In Many ways that project provided the proof of concept for The Utopian Seed Project to get off the ground.

In 2019 The Utopian Seed Project is planning another large okra variety trial with a whole new set of okra varieties, further exploring and celebrating the diversity of okra.

Peter Taylor is an award winning photographer and friend of the Utopian Seed Project. In 2018 he took a series of ‘beauty shots’ of many of the okra varieties we grew. See more of his work here and follow him on Instagram here. 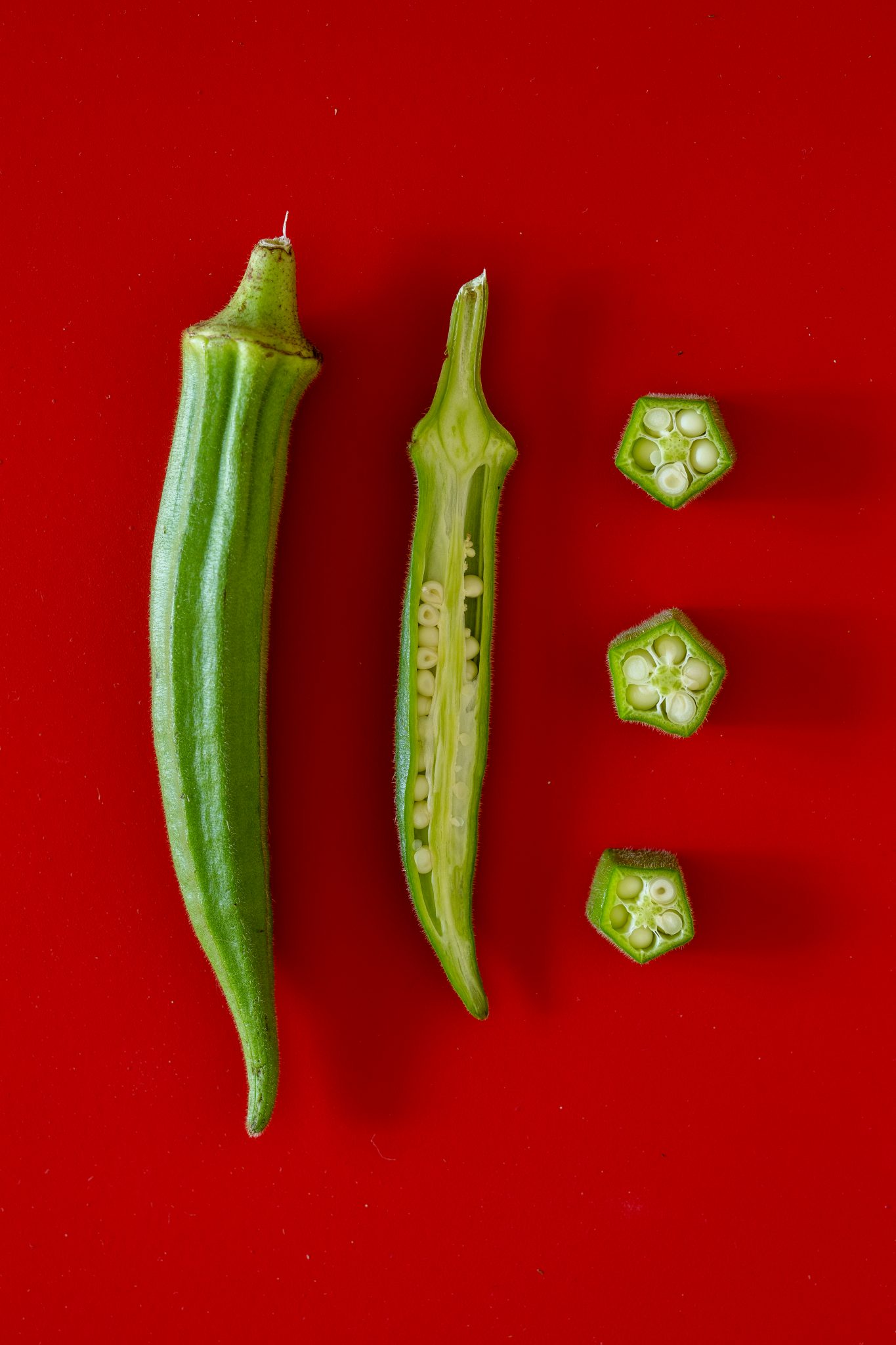 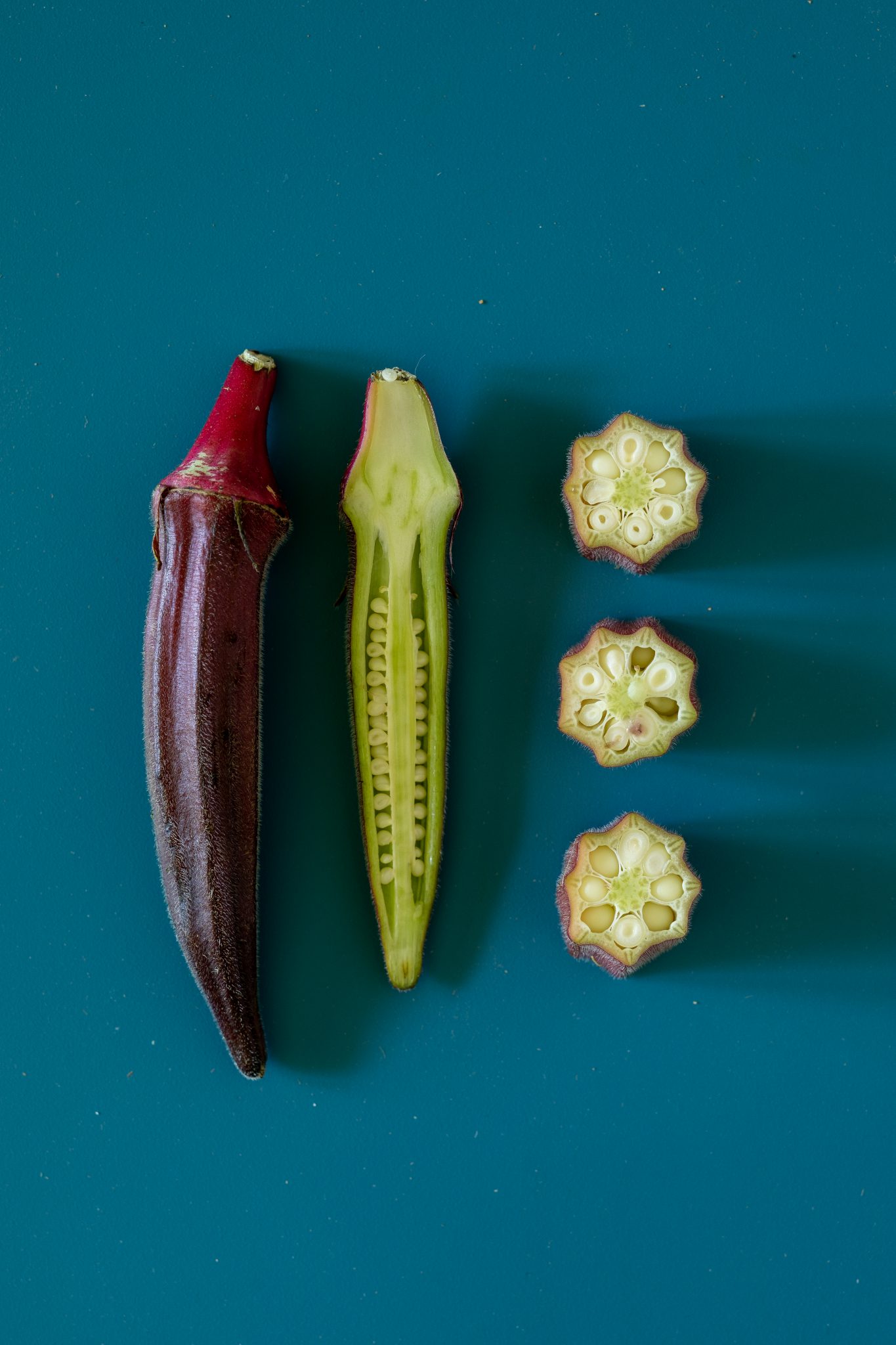 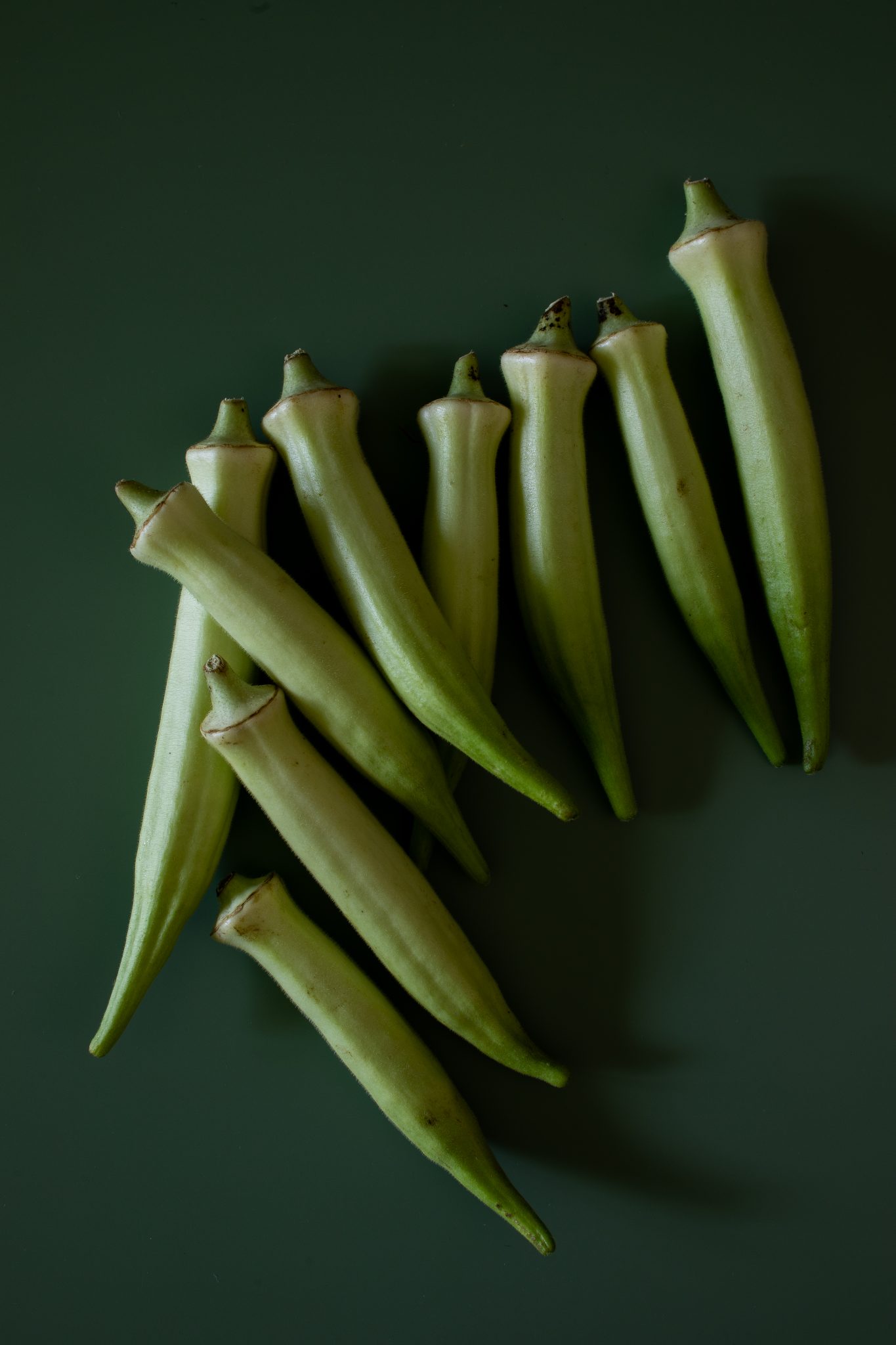 Abelmoschus manihot flowers are beautiful ❤️ we're growing a few different Abelmoschus manihot varieties this year and none of them are flowering yet, but this Korean Silk Flower is a variety that we've been growing for many years and is a reliable heavy producer. The flowers can be dried for tea and the leaves are edible and the plants are stunning!

Photo Credit @foodordeath_ (note: while these flowers look bigger than my head they are actually about 6 in across, there's some camera trickery going on!)

One of the many Abelmoschus varieties we're growing this year is a variety of West African Okra (Abelmoschus caillei) that Jon Jackson of @comfortfarms has been stewarding after receiving seeds from his mother's homeland of Liberia. This variety is very special to him and he's called it Motherland Okra. I'm very honored to be growing it.

So far it's one if the healthiest looking cultivars in the field and when @lionpawlivity visited yesterday, she gravitated towards Motherland Okra with no influence from me and sat down next to the plants. I tried to explain that this wasn't really okra even though it looks like okra and she said, 'You can't tell me this isn't okra, who's to say what is and isn't okra.'

It was an eye opening moment that made okra even more expansive for me. Any of five squash species are collectively called squash, kale is split across two or three species. Well, guess what? Okra now claims at least two species in my mind and one of them is a kick ass hexaploid endemic to West Africa!

Last year @lovesomegreen was here in North Carolina helping to hand cross all our high oilseed okra varieties. This year we're growing out the F1 populations to start the process of developing a higher oil content variety. Here's one of the crosses growing in Arizona, where Jordan has an indoor growing operation and was able to get a big headstart. It's exciting to have collaboration across the country!

This is Whidley White, the early 1800s okra I'm working to restore for @seed_savers_exchange

It's been a fun project, although it's taking longer than either of us expected.

This is my third year selecting and I have almost completely eradicated any red tinges in the leaf veins and largely in the petioles.

The pods are mainly pale, with some nearing a true white/cream. One study I read (LSU) suggested white is clearly dominant over green. In not experiencing that.

This year I have a large enough population to self pollinate the on-type pods, which should give me a leap forward in uniformity for next year...

There is a two tone look that is hard to appreciate in this picture, but many pale pods have darker green lines running along the ridge tops!

Big thanks to Michael Fortune for planting the okra at his farm in Marshall and allowing me to up my population size in a big way!

Here's a selection of edible summer greens growing at the #experimentalfarm right now. Even though you may never have tried (or maybe heard) of some of these, they are not new. We did not discover them. They belong to cultures older and wiser, ancestral work done to create many of the food crops that exist today, both known and forgotten.

We support eating and exploring these crops, and there is resilience in a diversified food system that will be much needed as climate change continues. But climate justice and climate work goes hand in hand with social justice and social work, so respecting those who came before (the work, the culture, the traditons, the people) is critical to our journey.

This picture shows a world of possibilities, but it also shows the world.

This is 3x 50ft rows of Puerto Rican Evergreen okra growing at Mark Dempsey's (who we know through @carolinafarms) microfarm in Swannanoa.

The seed originally came from the USDA and had some diversity in our 2018 planting.

Today we made some strong selections for a specific phenotype within this diverse population (red stem, red blushed pods, round pods, velvety pods, low level of branching).

We also rogued a number of bristly podded plants to eliminate those genetics as we're going to save seed from the general population as well as the specific phenotype. Bodie enjoyed eating the plants we culled...!

This okra tastes great, looks great, feels great, and is early and productive. Sounds like a pretty perfect okra to me :-)

Our collaboration with @wellseasonedtable is a great example of the mutually beneficial network we are working towards. Part of our mission is exploring new uses for traditional crops. In 2018 we worked with Well Seasoned Table, a local business willing to experiment, on okra seed sea salt.

In 2020 the okra seed sea salt is a regular and popular item in their product line. They source locally (okra farmers take note), and are offering 10% of all okra seed sea salt sales to our non-profit for ALL of 2020 as a thank you!

If you want to help out and join the community you can become a patron via the link in our profile (multiple Patreon levels).

Uniform, early producing, very productive and tasty pods impressed in 2018. Seeds came from the USDA. No description beyond the name. Green pods with red blushing and some variation in shape.

This year I planted 2018 seeds, hoping to replicate Jamie's experience and save the green pods with red blushing (I have a soft spot for this trait). Instead I have a field of very mixed pod shapes (rounded to ridged) and mainly pale green to whitish pods.

I now have no idea what is going on, but they're still productive, early and delicious, so I'm going to work out out.

Chef TT (@chefttlivinandlovin) came out to our Puerto Rico Evergreen okra grow out at Two Sided Farm in Mars Hill. She tasted an okra pod of every single plant and left a pink landscaping flag next to the varieties that really stood out to her. It was very exciting to hear her talk about the flavor differences between the different plants - everything from sweet pea like to spicy to citrusy sour to nutty, there was only one plant with really off flavors but all of the others were producing tasty pods so I'm excited to save seeds from this planting and share widely next year.

If you're a chef in the Asheville area and you have an hour or two to spare and you want to come and taste the row of okra - about 100 plants - then I'd love to get more input so we can make the best seed saving selections for flavor possible! Get in touch!