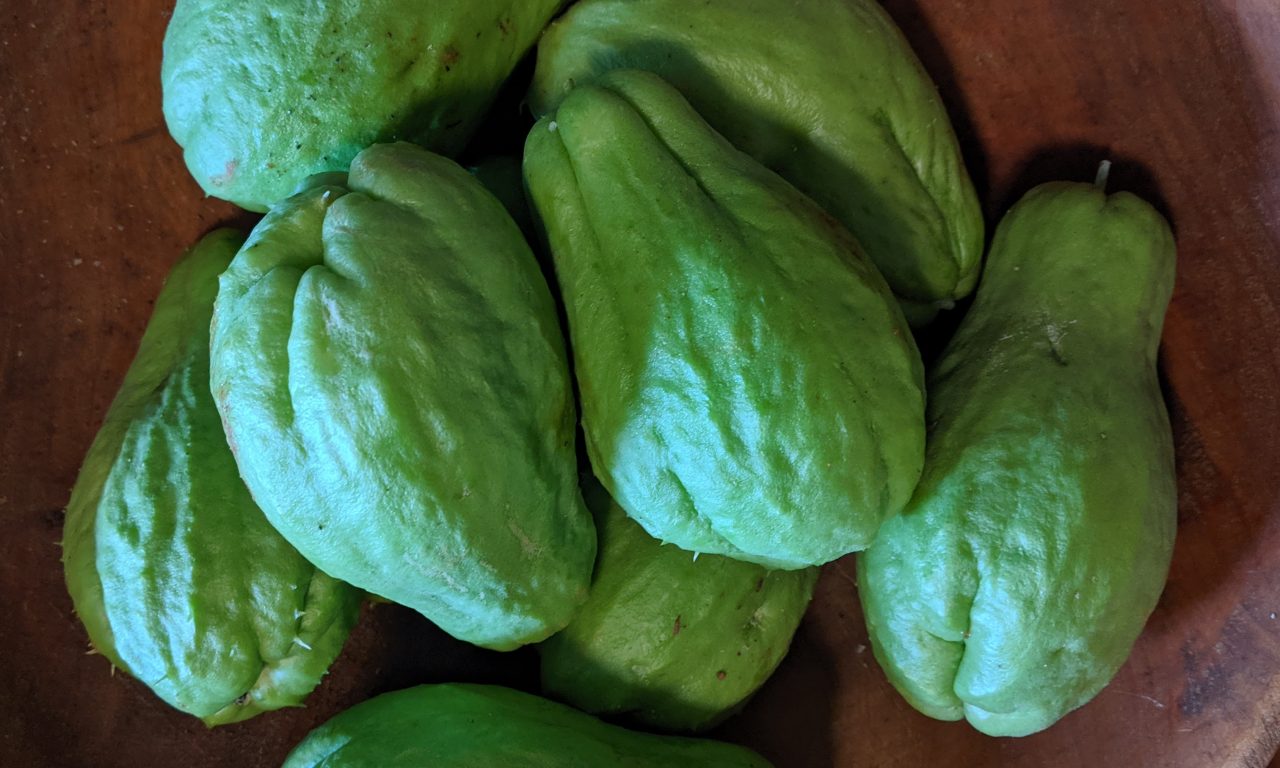 (Sechium edule) Read Chayote Blogs Here
Chayote (Sechium edule) – almost everything you need to know about Chayote (aka Mirliton in Louisiana) can be gleaned from one of my favorite quotes from Unsual Vegetables (Rodale Press 1978):

What has leaves like spinach, tender shoots like asparagus, fruits reminscient of summer squash and eggplant, nut-like seeds, and tubers that can double as potatoes? The answers is a superplant that rhymes with coyote!

If that doesn’t make you want to grow them then you’re on the wrong website! Chayote is in the cucurbitacea family and grows on vigorous vines. It’s main challenge for the North American grower is it’s photoperiod, which leads to a sometimes worringly late season harvest for this frost sensitive perennial. In general we see flowering on our main variety towards the end of August. 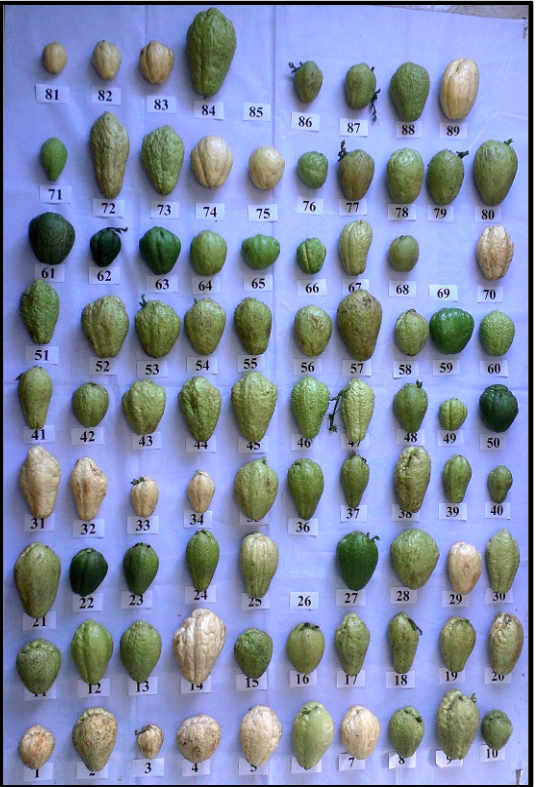 The Utopian Seed Project has been growing a single variety of chayote that Yanna Fishman received from a member of the Hmong community in Marrion County. The variety is a proven producer in Western NC.

We have begun working with a couple of additional varieties with the intention of building up the number of varieties available in this region. Chayote is a prolific producer and a great storage vegetable that thrives in the heat, plus the leaves and shoots are edible.

We are also working with Dr. Lance Hill and a small group of heirloom mirliton preservationists. The first project has been restoring and distributing an heirloom vine of Ishreal Thibodeaux, which is a white skinned variety.  The website, mirliton.org has an incredible amount of

Chayote harvest before the frost (maybe?!). Also known as Chocho and Mirliton.

Chayote (Sechium edule) aka Mirliton. Many people fail to grow chayote this far north because most varieties don't start flowering until way too late in the season. We've been growing this variety for a few years and it begins flowering towards the end of August and can be very productive!

This year Michael Fortune (@gardenus_maximus) grew this variety as part of our Growing Partner work to get more farmers on board with some of the crops we're working with. Many people ask about buying chayote and I'm pleased to say that Michael has surplus to sell direct.

These are large, fully grown fruit, suitable for winter storage and planting next year (each fruit contains a single seed - it'll sprout over the spring / winter, and you plant the whole thing in May!). He's selling at $5 a fruit or 3 for $12. Collection in West Asheville.

Excited to work with some of these different chayote this year. Thanks to Chou and Tou Lee for the spiny chayote (they say it tastes like cucumber). We also have King Kong, which could be a daylight neutral chayote (earlier fruit production could be a game changer for our region).

Chayote are on their way.

Excited to be part of the Ishreal Thibodeaux White Mirliton Preservation Project. This rare mirliton (aka Chayote) was sent to me by @chefjohnfolse, who has one of the last live vines of this heirloom mirliton. We'll be growing it out and giving it some very special attention to ensure its survival.

Here's a selection of edible summer greens growing at the #experimentalfarm right now. Even though you may never have tried (or maybe heard) of some of these, they are not new. We did not discover them. They belong to cultures older and wiser, ancestral work done to create many of the food crops that exist today, both known and forgotten.

We support eating and exploring these crops, and there is resilience in a diversified food system that will be much needed as climate change continues. But climate justice and climate work goes hand in hand with social justice and social work, so respecting those who came before (the work, the culture, the traditons, the people) is critical to our journey.

This picture shows a world of possibilities, but it also shows the world.

Chayote (Sechium edule) is a tropical perennial that we can grow in North Carolina as a temperate annual. Chayote is vining member of the Cucurbitaceae family, producing edible squash-like fruit, tender shoots, edible leaves, and an edible potato-like root if allowed to overwinter.

Note: chayote is popular in Louisiana where it is known as Mirliton.

This video is part of a The Utopian Seed Project series called, Meet-the-Plant, where plant experts introduce you to less known plants (in North Carolina) that have food production potential.

In this video, Brandon Ruiz, founder of CLT Herbal Accessibility Project and Utopian Seed Project board member, gives a historical, botanical and culinary overview of Chayote.

If you liked this video please consider become a Patreon Supporter via the link in our bio.

We're working with a group of mirliton (Chayote) seed savers to help preserve a near extinct variety called Ishreal Thibodeaux.

Two seeds were sent to a handful of growers and we were the furthest north by some distance! Our fruit grew vines, but not enough in our short season to produce fruit. So, when frost threatened, we took cuttings to overwinter.

The vines root pretty easily, but it's still a relief to see the root growth of a successful propagation! We'll take these cuttings forward to next season, getting a super early start, and will see if this variety can form fruit in a WNC growing season!

By David Hubbell
On August 28, 2013, we announced the sad passing of Mr. Ishreal Thibodeaux, who for more than forty years preserved the rare ivory-white mirliton that we named in his honor. At that time, through the generosity of the late Mr. Thibodeaux, Mirliton.Org shared several of this variety to ensure it would survive. Despite the best efforts of many dedicated growers, the unfortunate weather events in south Louisiana in August 2016 and November 2019 seemed to all but wipe out this cherished heirloom.
Fortunately, we learned through our ever growing mirliton network, that there are two separate growers who have vines that are currently producing a small spring crop. Through their kindness and commitment to the preservation of the Ishreal Thibodeaux White Mirliton, these gentlemen, Paul D’Anna and Chef John Folse, have partnered with us to form a team of committed and experienced growers to further propagate this variety under tightly monitored conditions.
Along with these current growers, Mirliton.Org selected two more individuals who had the capability and resources to follow the guidelines we had set forth. These individuals are Keith Mearns with the group Historic Columbia in Columbia, South Carolina and Chris Smith with The Utopian Seed Project in Asheville, North Carolina. Our project is set up to help the four growers communicate with us and each other so as to report progress monthly, help troubleshoot as needed, replicate previously recognized “best practices”, and collect valuable growing data that will be made available to future Ishreal Thibodeaux White Mirliton growers.
As with the past Adopt-a Mirliton Program, these growers have agreed to share up to half of their first year’s production to planters in their community. The success rate of this first round will determine the individuals who will be added to the future Ishreal Thibodeaux White Mirliton Registry. Ideally, we would like half of this second group to be experienced and dedicated mirliton growers that are spread throughout the Gulf south. ...